By the year 2005 the first phase of the project was completed and on the feast of the Holy Family 30th, December 2005 was officially opened by Bishop Moses D. Prakasam. The opening Mass was attended by many of the diocesan priests including the vicar general Fr. S. Prakasam.

In September 2005, Fr. Jeff made his first visit to the project. During this time Mary and Fr. Jeff sat with the bishop and some of the consultors of the diocese along with Fr. Sarveswara to plan ahead for the future of the Holy Family home. 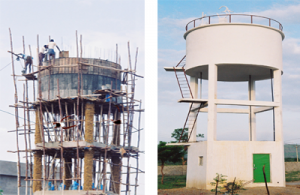 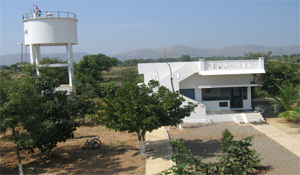 Electricity has been connected to the home however there are many times, sometimes twice per day, when the government will switch the current off without notice. In the summer months, the current can be switched off for a whole day or more. During this time temperatures can rise to above 50 degrees Celsius. Without electricity, the water cannot be released from the overhead tank. 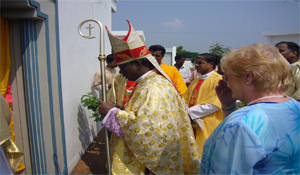 Between 2005 and 2010 the water has been used for domestic use in each of the houses and also to water the many trees that have been planted as well as the growing of several crops, especially paddy. Over 1000 trees have been planted throughout the campus to give shade to those who are living there. The trees are an essential part of the landscape as without them it would be impossible to go from house to house in the hot summer season.

As the number of needy people has increased, we have had to take on extra…