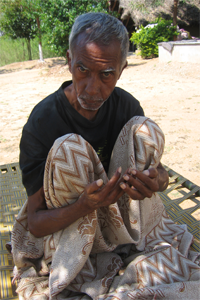 In the year 2005 Fr. Sarveswara, Fr. Jeff and Mary were attending the new government hospital in Kadapa. In the hospital grounds, they found a man who had been left to die. He had been left alone for several days without anything to eat or drink. He was covered in insects and excrement and smelt so badly that we had to turn away for a time.  Finally, we decided to take off the dirty clothing and wrap him in a clean blanket that we had in our van. We took him back to Balamma Satram where he was cleaned and medicated. His leg was totally eaten away in part and his foot was ulcerated to the point where the bone was protruding. This man was not able to communicate with us as he did not speak the state language of Telegu. Fr. Sarveswara named him Shindi as he thought that he had come from the north of the country from the few words that he was able to make out. Shindi has also a mental problem and sometimes becomes very violent towards himself and others. However, over the years these outbursts are becoming less.

Shindi has been with us now since 2005. He is in reasonably good health and can now stand and play ball with the children. His eyesight is poor. He loves a cup of tea at any time of the day and it is a pleasure to have him in the home. 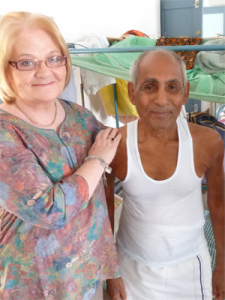 Although the name suggests a female guest, Rose Reddy is in fact male. Rose Reddy was a local post person and was able to look after himself until he had a very serious accident. In this accident, his legs were totally crippled and twisted. Rose did not have anyone to look after him so he was brought to Balamma Satram. Here he keeps himself very clean with the aid of the staff. He takes part in all the daily prayers and continuously prays for all the benefactors. 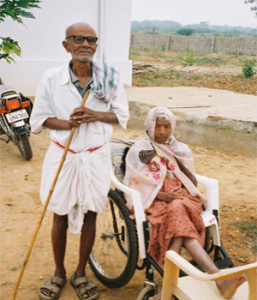 Chinnappa and his wife Annamma were both in very poor health and unable to look after themselves. Chinnappa had very bad eyesight and was unable to do very much for Annamma who was in much poorer health than himself.  Chinnappa was able to get his wife looked after by an aid worker who was in a position to look after female displaced persons. He himself then approached Fr. Sarveswara who had just started to establish Balamma Satram. Balamma Satram at this point was not equipped to look after women. However, both places were in the Kadapa area and so they were able to keep in contact with each other.

Shortly after Chinnappa came to Fr. Sarveswara the lady who was looking after his wife told us that she was unable to carry on looking after displaced women and so Chinnappa was faced with the problem of where to place his wife. The sisters of Mother Teresa were approached but as their nearest house was over a days’ journey it was felt that this was not an option; both Chinnappa and Annamma needed to be kept as near to each other as possible. Fr. Sarveswara decided that the only possible solution was to quickly build a small room so that Annamma could be cared for.

Chinnappa and Annamma spent the next six months together. This was a great blessing for them because Chinnappa was able to do small things for his wife until she died. Annamma was given a dignified burial. Her husband, Chinnappa died three years later.

Narayanamma was struggling to survive. Her children had gone off in search of work as they could no longer feed themselves; however, they did not return. Narayanamma was brought to Fr. Sarves in a dying condition. She was unable to walk due to lack of food and water. After two years she was energised having been given love and care at Holy Family.

Jayapaul's Family Jayapaul Nandipogo was married with four children. He was trying to feed his…

January First trip to India with Bill and Pamela. Click here to read what Bill…