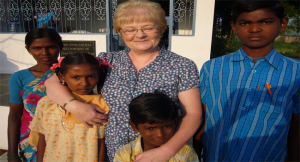 Jayapaul Nandipogo was married with four children. He was trying to feed his family by working for daily labour in the field. Jayapaul sustained an accident while working which caused his leg to go gangrenous. He became so ill, Fr. Sarveswara decided to look after him until he died. His death meant that his widow and children had no way of coping or feeding themselves so it was decided that his wife Kantamma would come and work at Balamma Satram and sponsors would be found to help with the education of the children.

Kantamma works very hard for the home and the children are a credit to her and to Fr. Sarveswara as they are doing extremely well at school; an achievement that would not have happened had Balamma Satram not been founded. 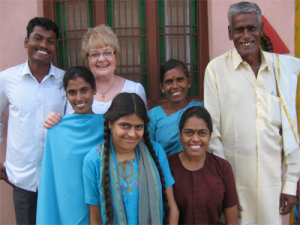 This family of father mother and their four children, Gopal, Pushpar, Raju and Vijaya were given a lifeline by the foundation of Balamma Satram. Two of these children are severely crippled and both parents have a mental problem. They lived in a chicken pen home along with rodents and insects. The foundation of Balamma Satram was able to re-house this family due to the donation of a crippled man back in England who wanted to help someone crippled in the same position as himself. Through sponsorship one of the girls is in full-time education and doing well. The other is too crippled and is being taken care of at Balamma Satram. The parents and the other two siblings are now in a decent brick built home. 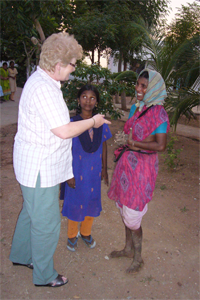 Kammala is a lady of approximately 40 years of age. She was left to bring up her three children due to her husband being an addict and a drunk. There was no hope for this lady until she came to Balamma Satram with her daughter asking for help. Now she and her children are thriving. Kammala is working at the home and the children are being educated through the sponsorship programme.

January First trip to India with Bill and Pamela. Click here to read what Bill…